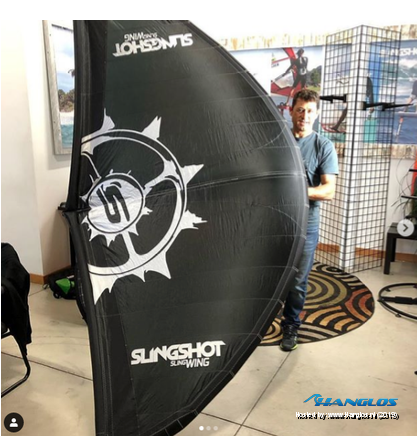 We didn’t come up with the symmetrical wing concept, but the Slingwing was a FIRST, at least as far as we are aware, in utilizing our inflatable kite technology to ensure a lightweight, safe & floatable product.

Looking back, it’s clear why the Kite Wing worked on snow and ice but the water-bound Wind Weapon never really took off. The reason: Friction (or lack of). Friction is the reason we haven’t seen handheld wings work for water sports, and the reason we kept the Slingwing tucked away in the R&D vault until only recently.

Foiling essentially eliminates all friction once you’re up and riding.  Being a pioneer and leader in all things foiling, we knew someday soon larger wings with more lift and better riders would evolve to a point where a device like the Slingwing would have a place. Like a lot of things Slingshot and designer Tony Logosz has created over the years, the Slingwing was simply ahead of its time.

The Slingwing is a single-strut inflatable wing Slingshot first developed almost ten years ago and is officially launching to the public this summer. The wing is symmetrical from end to end and is aerodynamically designed to fly weightless like a giant paper airplane when held horizontal into the wind and to provide propulsion when engaged properly.

Benefits of the inflatable technology